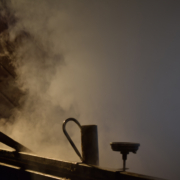 The “drip, drip, drip” of sap landing in a bucket isn’t a sound that’s heard much in Vermont anymore. Most commercial sugarmakers rely exclusively on tubing to silently transport sap downhill to a tank or the sugarhouse. But even if buckets were still the go-to collection method, sugarbushes in the state would have been quieter than normal this year — the “drips” fewer and further apart.

The sugaring season wrapped up in mid-April, and sugarmakers around the state are generally reporting a down year. Mark Isselhardt, maple specialist with UVM Extension, cautions that “normal” is a relative term in sugarmaking, as every year there can be wide variances in production between sugarmakers in different parts of the state, and even within local microclimates. But based on reports he’s received from sugarmakers around the state, Isselhardt estimates that most producers made about 25-35 percent less syrup than normal.

Mary McCuaig’s family has been making syrup at Top Acres Farm in South Woodstock since the 1920s. The fourth-generation sugarmaker said that the sugar content of sap this year was lower than it usually is, which means that it took more sap to make each gallon of syrup. (In an informal survey done by UVM extension, 72 percent of respondents reported a similarly low sugar content.) McCuaig added that by the time the sap really started flowing after a cold start, the syrup being produced was dark and the season was over. The good news, she told us, is that thanks to high-tech spouts, improved tubing lines, and a vacuum system, Top Acres Farm was able to limit the losses; it made about 82 percent of the crop that it has averaged over the past 10 years.

For consumers, the news is not at all dire. “I definitely think there will be plenty of syrup around,” UVM Extension’s Mark Isselhardt told us. But he adds that for individual sugarmakers, especially those who have recently made significant investments in equipment and technology, the loss of income from having less syrup to sell may be dramatic. A reminder that in April, as in all months, agriculture in Vermont is subject to the ever-unpredictable nature of weather. 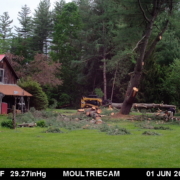 May opened with a lovely spring snowfall in the mountains.
Scroll to top