I remember hearing a story once about a spring snow like the one we woke up to this morning. A farmer had planted a crop – trees, I think; little seedlings – and then a few days later snow covered the field. The farmer panicked, and ran from seedling to seedling with a broom, brushing the snow off. But there were thousands and he could only get to so many. A few weeks later, all the seedlings he’d rushed to save were dead. And the ones that he hadn’t gotten to had recovered, having weathered the cold temperatures beneath the blanket of snow. 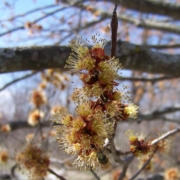