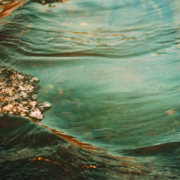 According to a recent National Geographic story by Paul Salopek, less than one percent of the world’s total water supply is available to drink. The next line editorializes: “And yet, we squander this treasure like fools lost in a dessert.” The piece goes on to document a water crisis that’s unfolding in India.

We’re so lucky to live in a temperate place that’s water rich, and yet that’s not to say we’re immune to water issues. The newscast this morning announced beach closures on Lake Champlain due to cyanobacteria blooms that are fed and emboldened by land use practices. Our moderate drought, coupled with an August water table that’s usually low, has reduced a lot of streams to a trickle. Just the other day a friend used his well to fill a new pool, and a couple hours in the water slowed to a trickle and turned rust colored. Oops. It’s an illustrative story – kind of the world in microcosm.

Spend some time with Marjorie Ryerson and water will inevitably come up. It’s been a muse to her for years, and was the focus of her 2004 book Water Music. In that compilation, she teamed up with 66 musicians from around the world to celebrate water in photographs and words and music. The project grew into global Water Music Project (www.water-music.org).

Marjorie has been a professional writer, photographer, editor for years, and was a legislator in the relatively recent past, so a lot of Vermonters will know her this way. Those who studied writing at Johnson, Castleton, or Middlebury’s Bread Loaf campus over the past two decades will know her as a teacher. She’s been an outspoken advocate for the Vermont State College system in the midst of its funding crisis – it’s an issue that ties directly to rural Vermont in the fact that Vermont Technical College (originally the Vermont School of Agriculture) still counts farming and Ag among its core programs. It’s how many first-generation-to-go-to-college students get there start.

It’s a pleasure and a privilege to welcome Marjorie to our Board of Directors.