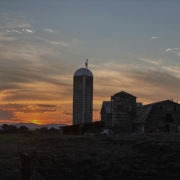 As we work on this project, we’re constantly reminded of what a small state Vermont is — small in the very best way. An example of this involves the cover image. We chose the Susan Abbott painting because we thought it captured rural Vermont. Shortly after releasing the image to the public, we got this letter, validating our choice:

Just want to say “Wow!” to the cover choice for the Almanac. Susan Abbott’s painting captures the perfect blend of Vermont imagery, somehow incorporating the state’s flat-rolling-mountainous qualities in the same image; the sense of rural life that goes on and on despite everything; the typicalness of the barn and older vehicle, the road and dooryard; the wide view of milky, lovely skies.

We also got letters — almost immediately — from three people in the extended Newton family who said: “hey, that’s our farm!”

I asked Denise Newton to tell me a little more about the place, and she wrote;

This farm has been in our family since the 1940’s. We are a third generation dairy farm. We sold our herd because of the economy in Spring of 2019. My husband Stephen dedicated his many 41+ years to this farm. Our four children, Amy, Shannon, Todd, and Lindsey are very proud of their hard working family and have put in many hours, as I did, to support this farm and will always call this place home. Stephen and I have diversified the farm and raise pigs, turkeys and a few cattle. It’s sits on 70 acres in Marshfield with a beautiful view of Camel’s Hump with great sunrises and sunset, also with an 18 acre sugarbush. It’s truly our little place called paradise. The truck in the picture is Stephens and the round bales are from his harvest.

The photo at the top shows one of those lovely sunsets. 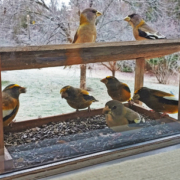 It’s predicted that the finch species that nest and winter here will be joined by an unusually large number of their more boreal brethren this coming winter. Winter finches rely on tree seeds in winter and when these are scarce, the birds will be on the move. Most of these finches usually come south, but some species, like white-winged crossbills and sometimes pine siskins, may move east or west rather than south when food is scarce.

It’s easy to foretell the status of the boreal seed crop by mid-summer, well before the seeds have matured, by the number of visible cones on tamaracks, the spruces, and hemlocks. White pine seeds take two years to mature, so estimates can be made of the seed crop both for the coming winter and the next one by counting the new small cones and the larger, nearly mature ones.

You might think that a poor seed crop, though good for us birdwatchers, would be terrible for the finches, but tree seed crops have always had big ups and down and the birds that depend on them are used to and good at being nomads. In many years, Christmas bird counters in Algonquin Provincial Park in Ontario have found fewer than a hundred finches of all stripes, while almost 13,000 were counted in 1989.

Pine siskins nest to the north of us and they often come this far south in winter unless there’s a big crop of conifer seeds back home. We can expect to see more of them than usual this winter.

The birch and alder seeds that redpolls like are in short supply this year and because of that, many redpolls have already shown up here and more are likely to arrive. They’ll eat goldenrod and aster seeds until the snow is deep. When there’s an exceptionally large crop of paper birch seeds, redpolls may stay put in the north.

Perhaps later in winter, when they have finished off the supply of white pine seeds, red crossbills will head south. Typically, most of them don’t migrate.

We might well see a lot of white-winged crossbills this winter because spruce and tamarack cone crops are poor.

Many more American goldfinches winter in our area now than in the past, perhaps because of the ever-growing number of well-stocked birdfeeders to be found. Absent birdfeeders, they, too, rely on tree seeds in winter, when thistles and the many other composites that they eat in summer are buried in snow. By late February or March even the boreal stay-at-homes may head our way if they run out of food.

The population of evening grosbeaks rose dramatically during the severe spruce budworm outbreak in the 1970s and 80s and has recently increased again – along with a new outbreak of spruce budworms. Both adults and chicks eat budworm caterpillars in the summer, but in winter it’s mostly deciduous tree seeds from sugar maple, box elder, and ash. They may deplete this resource and show up here in large numbers.

Because there’s a good supply of mountain ash seeds (it seems that the birds spit out the berry skins and much of the pulp), pine grosbeaks are likely to stay in the boreal forest, which they often do. They don’t migrate unless they have to.

Thanks to The Finch Network for these forecasts.