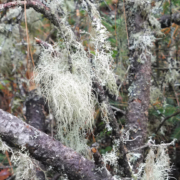 In March of 2020, when Covid-19 started dominating the news and Vermont entered a state of emergency, I hightailed it for the woods. For many years, there was a stash of usnea tincture in the root cellar awaiting a sniffle or cold. When my boys were young, I believed it best to save antibiotics for things like Lyme disease and strep, and would just have them drink a shot of usnea if they weren’t feeling well. But, I’d been lazy and with this scary new virus changing the world, I realized I had hardly any left!
And so began the hunt around my hilltop. Pronounced ooze-nee-ah and better known as old man’s beard, the long and light green lichen tendrils grow from tree trunks and branches in Vermont forests, and many other places around the globe. Near and Far-East Asians considered it to be a super effective natural medicinal, others have used it as an excellent gauge of environmental pollution, and some refer to it as an indicator of true north. But, as was the case with Covid in November 2019, most people have never even heard of it.
I first learned about usnea a couple of decades ago during a foraging workshop in a state forest. The instructor pointed out all kinds of other interesting things like chaga and puffball powder, but most memorable was a handful of dangling green lichen she plucked from a dead conifer, “This here is usnea, excellent for bacterial and fungal infections. It’s stronger than penicillin.”
Wow. How perfect would it be to harvest medicine from my own woods? And so began a hunting obsession that had me gathering bags everywhere I hiked, from my own back forty, to the Green Mountains, to the White Mountains, and the Coast of Maine. Steeped in vodka, mason jars of medicine lined my shelves, got taken for granted, used up, and finally, never replenished. Somehow, along the way, I’d dropped the ball.
Between reading more about Covid spiking in New York City and beyond, I took up the old hunt with many purposeful walks off the porch and into the woods. Usnea prefers old or dead conifers in a moist forest, and as we have plenty of such habitat, I fell back into my old obsessive ways, filling the jars, setting up the tincture, and feeling proactive.
The singular focus on finding usnea rekindled the initial fascination. Usnea is a combination of two organisms, a fungus and an alga. The fungus provides the core, the green alga sheath gathers energy from the sun, and the two completely different life forms come together and create a new structure.
Some other lichens resemble usnea, and often, they are even intertwined together. The way to distinguish usnea is to hold a lacy strand in your fingers and gently tug on either end. The outer green sheath will split, revealing the white inner pith that will stretch before snapping. Usnea is elastic, other lichens aren’t.
Internet research reveals that usnea has been used therapeutically for over 3,000 years to treat bacterial and fungal infections. Native North Americans used it as an expectorant, a dermatological aid for boils, and as an absorbent emergency dressing for backwoods wounds. Today, it is still applied by Asian and Russian herbalists to treat pulmonary tuberculosis, bronchitis, infected wounds, external ulcers, and scrofula. Contemporary proponents of alternative medicine claim usnea is useful for treating the common cold, sore throats, and coughs, and some studies suggest that usnea has anti-cancer and anti-viral properties.
Given the right conditions—not too dry and sunny—usnea grows worldwide. Once, I was in Uruguay and saw miles upon miles of wooden post fencing draped with the beautiful tendrils. But, even though I have seen huge clumps hanging from the trees below ski lifts in Switzerland, it is becoming less common to see usnea in western Europe. Apparently, lichens are on the decline there because of pollution and the depletion of suitable forest habitat.
Most interesting is how usnea can also serve as an extremely sensitive filter, and therefore barometer, of fossil fuel pollution. Heavy metals accumulate in usnea, and sulfur dioxide and acid rain will kill it. So, if you decide to harvest some usnea for its botanical properties, try to stay away from busy roadsides and heavily populated areas where pollution is heaviest. On the bright side, if you come across a forest with lots of healthy usnea, you may assume you’re in a relatively clean environment.
Finally, if you’re lost in the woods and remember that you once heard that usnea could show you where true north lies, do be careful. Usnea grows on the moist sides of trees, which in an open deciduous forest, is probably the shady north side, hence the old-timey trick. But a denser, closed canopy forest that holds moisture uniformly everywhere creates an usnea free-for-all on all sides of the trees. Throw steep hillsides and different shade angles into the equation and your compass needle is swinging out of control. So, it’s probably best to stick with gauging direction from the sun.
I can’t quite walk my hilltop with my eyes closed, but can certainly navigate the well-worn paths at night with a headlamp. So, I paid no attention whatsoever to compass points as I greedily plucked the wispy fronds and stuffed my pockets to restock the shelves. By the quantities available, it was a nice counterpoint to believe the woods were still healthy and unchangeable in March of 2020, in a world that didn’t feel as if it would stop changing anytime soon.