According to the Chinese Zodiac calendar, 2020 is the Year of the Rat. That sounds about right, so far. But at least in our old farmhouse, it’s the Year of the Earwig. We’ve been inundated with them the last few weeks, the way we are at other times of the year with house flies and lady bugs. But rather than simply being a nuisance, earwigs have a disgusting factor to them. Sort of the country version of cockroaches. And right now they’re everywhere: on the bathroom floor, on the kitchen counters, on our toothbrushes. The name “earwig” has an even more disgusting, though mythical, origin: the folklore that these insects would crawl, or wiggle, into your ear to lay their eggs.

At the moment, our earwig population seems to be multiplying exponentially. Which, after doing a little research, I now realize isn’t far from the truth. Female earwigs lay as many as 60 “round, pearly” eggs in shallow soil, and the insects reach the adult stage in about 70 days. It also turns out that earwigs prefer hot, humid environments—so the recent weather has been perfect for them, and perhaps that’s why they’re so plentiful and active this year. “In their search for food and shelter, earwigs crawl over the ground and readily climb houses, fences and trees,” according to UVM Extension’s website. “They forage at night and hide during the day in cracks, hollow stalks of leaf whorls of plants, tubular lawn furniture, and hollow aluminum doors, and under the husks of corn cobs. Their invasion of houses begins sometime in July.” I can confirm that invasion has begun. 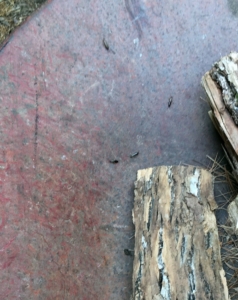 Every piece of firewood in the pile seems to cover a colony of earwigs.

We haven’t resorted to traps, and putting insecticide on our toothbrushes seems unwise. So we’re left to manually exterminate them, one at a time. The truth is that, despite the menacing looking pincers on their abdomens, beyond the possibility of a pinch, earwigs don’t pose much of a threat to humans. Gardeners, however, may feel differently—the damage that earwigs do to plants like lettuce, beans, and even raspberries can be severe. We’ve definitely found that there’s no escape outdoors at the moment; we’re stacking firewood right now and each piece in the pile seems to be covering an entire earwig colony.  Though I doubt they are eating too much of our wood.

The good news is that earwigs only live one year, with many dying during the winter. So by the time the Year of the Ox comes around, this batch will be no longer with us. Hopefully they disappear from our house long before that.