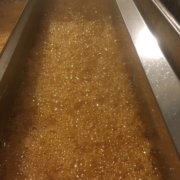 The weather cooperated yesterday – the hard freeze in the morning felt like the sort of freeze you’d get in mid-February. The sap didn’t start running until around noon, which let us catch up a little. We acid washed the pans to remove the scale on the bottom. We canned and moved syrup which had backed up in the finishing pan.

We’re in this weird place, mentally, because the calendar and the cool weather says we should be in the thick of things, but our guts, and much of what we’re seeing outside, say the end is near. Last year we were just getting going in mid-March. But this winter and early spring have been very different. The snow’s gone here. The red maple and popple buds are bordering on breaking. There were reports last week of wood frogs in town. The syrup we’re making is still on flavor, but it’s very dark. The high temperatures forecast for Friday are in the 60s. It feels like early April.

And so we hold out hope. And we’ll wait and see.