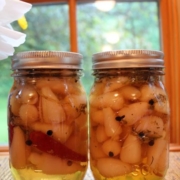 One of the reasons that ramps, or leeks, or wild onions, or whatever you call them, hold a dear place in people’s hearts is that they’re relatively long-lived and predictable. Morels are mysterious and can’t really be counted on. Fiddleheads sprint to maturity, so you’d better be on them. But ramps pop up dependably in April, and if you miss the early-season window when everyone’s all excited about them, you can always go back in late spring and pop up some perfectly edible bulbs. In the early season I like to sauté the milder green parts and simmer or braise the white bit with potatoes or meat. This time of year, the foliage is too far gone to use, but the bulbs are bulbous – more pearl onion than scallion – so your harvesting footprint is smaller than it is in early spring.

Back in the days of frugal living, pickling was a go-to technique for produce that was past its peak. So that’s what we did here. The bulbs were trimmed and packed in pint jars. We added a few dried chilies from last year’s garden, a pinch of peppercorn, some herbs de Provence (fennel adds an especially nice note). We used white wine vinegar because it’s what we had – different vinegars give things a different flavor profile, so it’s up to your palate which you should choose. Our brine recipe was 1 cup vinegar, 1 cup water, ¼ cup white sugar, ¼ cup maple sugar, 1 tablespoon pickling salt – you can scale up from there. Bring the brine to a simmer to dissolve the sugar and salt, then pour over the ramps. Cool and refrigerate, or process in a hot water bath for longer-term storage.

https://vermontalmanac.org/wp-content/uploads/pickled-ramps-rotated.jpg 612 408 Dave Mance III https://vermontalmanac.org/wp-content/uploads/VTALMANAC_LOGO_STACK_TAG-300x150.png Dave Mance III2020-06-11 12:53:172020-06-11 17:24:50Pickled Ramps
Sometimes, in the middle of the fronds of interrupted ferns, the leaflets are... Thick bushes are a good place to house the short-tailed fledglings that are...
Scroll to top