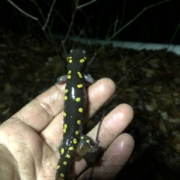 There are things that make someone a good sugarmaker, like an understanding of forest health, keen attention to detail, endurance. But at the end of the day, the success of any given season mostly comes down to the weather, which no one has any control over. This season ended up being a perfect case in point.

It was a cold and snowy February in southern Vermont, so there was no meaningful February sap run. We got a minor run on the first day of March, but then a cold front moved in and it didn’t get above freezing for seven straight days. The trees don’t run when they’re frozen, so this amounted to a lost week. We could have, in theory, made up that lost time in April, but only if it stayed cool and March-like. It did not. Three days into the warmup we had a three-day stretch where the highs reached 60, 66, and 56, temperatures that are really too warm. You can absorb a three-day stretch of this, but the seven-day heat wave that came on March 20 – 26, when temperatures soaring into the mid-70s, was just too much. The warmth changed something in the trees, which changed something in the sap. Last week, the syrup went off-flavor. The sap still came after that, but neither we nor the place where we sold a portion of our sap this year thought it was worth the time and effort to collect and boil it. And so we’re done.

Examining the weather from a different angle, I noted that this March, in our woods, there were 11 days when it was in the 30s or below – a little too cold. And there were 11 days when it was 60 degrees or higher, which is a little too warm. That left just 10 days in the sweet spot. I hauled sap on 22 days this season. Last year, when the weather was more consistent, I hauled sap on 32 days in a season that started on February 24 and ended on April 2. As the days-spent-hauling number would suggest, our yield this year was off by almost a third compared to last. In 2020, our Maple Hill bush averaged 29.5 gallons per tap, this year the average was 20.6.

But it is what it is. Compared to last year, this season was a disappointment. But one of the good things about getting older is that your perspective broadens. As a young man, I used to be happy with 12 gallons of sap per tap. Middle-aged me is balking that I even wrote that line, thinking that there was a lot less riding on a season when i was 25 years old. But young me is still in there somewhere, and immensely grateful that the trees gave so much.

Bulk syrup prices have been creeping downward for the last decade as production boomed in the Northeast, and an off year, production-wise, that keeps the packers honest and a little scared about supply probably doesn’t hurt in the grand scheme of things.

Near the end of the season, I just happened to look closely at the tongue that connects the trailer hitch to the pickup and noticed that it had cracked and was hanging on by a strip of twisted metal. Had the trailer broken free with a load of sap on it, it could have been a disaster. That didn’t happen.

Near the end of the year I found a spotted salamander trapped in a bulk tank swimming in 1,600 gallons of sap. I pumped it down and climbed in and rescued the silly thing. Later, I told my 4-year-old about it, and the next day, I’m told, it was the talk of Evergreen Preschool. Nobody there would have even comprehended what 20 gallons of sap per tap means, but the fact that I rescued a salamander gave me Ryder-from-Paw-Patrol status. I felt like I earned a bit back in her eyes after being gone so much for the last two months.

We’ll get through this pandemic and there will be better days ahead. Thanks for reading.