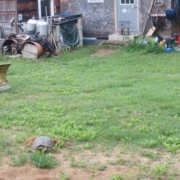 Editor’s Note: Our friend Carolyn Haley, from East Wallingford, checked in with this Dispatch.

Two Junes ago, this turtle – or its relative – settled into a shady, moist corner of our yard. The thing is the size of a serving platter. My first thought was to be concerned about our indoor/outdoor cats, who might investigate and get their limbs snapped off.

On that first appearance, I consulted the local animal warden as well as an expert on turtles I found online. Their advice was to ignore it, and it would move on. It did. And we never saw an outbreak of mini turtles.

I dismissed the experience from my consciousness, that is until the snapper turned up the next year in the same place at the same time. And then sure enough last week, while I was bringing in the bird feeders, I saw a large lump in an open sandy area of the side yard that serves as our kitties’ natural litterbox. It was the snapping turtle, digging down into the soft dirt with both her rear legs, then pushing the sand out sideways. She was, of course, dropping eggs rather than poo.

The site is an anomaly in our heavily-trafficked yard, where four 100-foot pine trees once grew. We had them taken out a decade ago to save the house from getting crushed in a blow-down, and the area has never grown in. Hence its popularity as a litterbox. And, apparently, an incubator.

I watched her – entranced – for at least an hour. But the real-world question is: what do we do now? There’s a pile of eggs smack in the middle of a daily transit path for humans, animals, and vehicles. Should I mark it with a stick and wait to see what happens? Internet research indicates hatching could occur as late as October. By then we will have transited the patch a dozen times with a lawnmower, not to mention daily foot traffic and weekly vehicle traffic.

Just another example of the endless, precarious balance between people and nature.

Editor’s Note: We checked in with our friend David Carroll about all this. Carroll is an author, illustrator, and naturalist who’s been observing, and fighting to protect, turtles for 50 years. (His memoir is entitled “Self Portrait with Turtles,” which gives you a sense of the devotion.) Here’s our email exchange:

. . . One of our writers filed a piece that details a snapping turtle nest that, unfortunately, is right in the middle of a heavily-trafficked part of her yard. She wants to mow. She needs to drive a vehicle through there.

What would one do if they found themselves in this situation? And if there’s an option to move the nest, what are the best practices one would follow?

Thanks for humoring the question. Your name is the first one that springs to mind when I think turtles.

Of course the best option would be to welcome such an event and walk, drive, and work around the site; it is not such a huge area. Maybe have the compelling experience of seeing the nest hatch out. But she clearly wants her yard. Moving a snapping turtle’s nest is a real project and has to be done correctly – all eggs kept in their present position, at the same depth. Maybe she has a naturalist, biologist, herpetologist friend who might want to undertake relocation.

Mowing over the nest would do no harm, driving would not impact it if tires did not directly run over it (and maybe the nest would survive even that). Stepping on it (hardly seems necessary) would not be harmful – they lay eggs fairly deeply and usually reach back under a shelf of earth. She should know that the eggs are not likely to hatch until sometime in September, possibly into October, depending on how the summer temperatures go. Unless there are barbed wire fences along both sides of a very narrow pathway, leaving it up to fate with minimal thought beyond avoiding heavy impact or digging would seem the best route to take. I’ll show more of a bias (tilted heavily toward turtle) – what good are, how important are, lawns anyway? But then, our house insurance company has characterized our place as “overgrown” – maybe it’s time to buy a ride-on mower?

My bias aside, I am grateful that she shows concern. I hope you can make something useful out of this. Good to hear from you in any event. 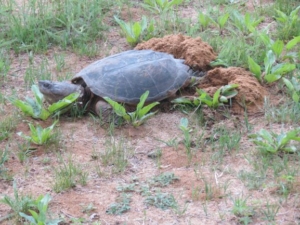