For years, critics of factory-farming have pointed out flaws in the system. How big agribusiness puts family farms out of business, which changes the character of rural places. How factory farm operations disconnect farmer and animal, turning living beings into raw commodities. Now, the coronavirus is helping expose another downside – the fragility of a monopolistic system.

A roll-off truck full of hogs from Ohio rumbled into our little Vermont town last Friday. On Saturday morning they were killed and two showed up at my house to get cut into meat. This was an unplanned event. As the big commercial slaughterhouses in the Midwest close (and by big we’re talking facilities that can process a million pigs a year) commercial pig farmers are stuck with no markets. They’ve got hogs that are getting too big – at a certain point slaughterhouses won’t take them – and the next crop of piglets are ready to take the big ones’ place. And so the farmers are stuck. They’re unloading fully-grown pigs for a song to those who want to cut them up themselves. Estimates right now are that 5 to 10 million will be euthanized and disposed of before supply chains unkink, while ironically, grocers are raising the price of pork and preparing customers for a meat shortage. Here’s a newsstory from NPR (the source of the estimate) where you can learn more.

In Vermont we don’t have farms that produce meat on a huge scale like they do in the Midwest. That’s not to say the ripples aren’t being felt here, though. This recent story in Vermont Digger pointed out that some dairy farmers, who are being told to cull their herds to reduce milk production, are finding it hard to find a slaughterhouse to process their beef. Vermont has 13 meatpacking facilities – all tiny when compared to the enormous packers in other states – and they’re booked up for months.

I have all the respect in the world for people who are bravely trying to tame/reform/fix an agricultural system that is in many ways profoundly broken. One way I choose to help – and you can, too – is to unplug from the factory-farm-to-megamart-carousel, where possible. Buy from your local farmer. Or raise animals yourself. In doing so we reconnect with the land and our state’s agricultural roots. We support local. We restore a tiny measure of sanity to food supply chains.

I cut that pork up on mother’s day, keenly aware of where the pigs came from and how dysfunctional the whole endeavor was. A silver-lining, of course, is that I got a pig for next to nothing. A bigger one is that it reminded me to get a locally-raised hog lined up for the fall. 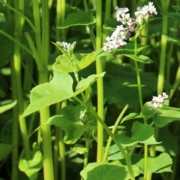 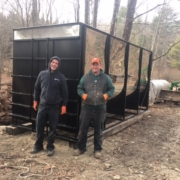 Yellow Grub
Wood frogs have hatched in all the vernal pools that I’ve been looking at,... Hobblebush leaves are nice in the summer, colorful in autumn, but now, as they...
Scroll to top