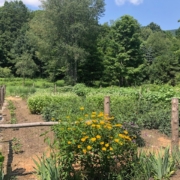 There’s an old axiom that to be a good builder you need to learn to think like a drop of water. Farming and home gardening can be similarly reduced to: you need to learn to think like a weed. There’s hundreds of years worth of cultivated plant knowledge at our fingertips, and expert growers who can tell us exactly what each garden plant wants and needs. But unless we’re growing in the controlled conditions of a greenhouse, this knowledge is partial at best. Out in the cruel, bare dirt of our short Vermont summer, the art of eliminating competition is where the garden is going to be made or broken.

We’re working on a story for Volume II about all this; talking to professionals about their tricks of the weed-killing trade. But in the meantime I thought I’d share some thoughts from my own garden this year in the hopes that they’re useful to other backyard growers who might be new to this. The plot is 1,800 square feet, and this particular garden is two years old. So far I’ve been able to keep on top of the weeds, and to quote the late Kenny Rogers, knowing when to hold ‘em and when to fold ‘em is probably the biggest reason.

I kept my cards folded all of last year. I broke ground in the spring of 2020, but then cover cropped instead of planting. This plan was based on respect for the established perennial vegetation that was being plowed under, which was going to rise again. It didn’t come to dominate that particular patch of ground by accident. This garden was built on a lawn, so crabgrass was the toughest plant of the bunch. But in a weedy meadow out back, in a different planting I did at the same time, the endemic goldenrods, milkweed, and fern all pushed back in a similar way. Patience was key. Had I tried to grow before the sod had broken down, it would have been a nightmare to fight the crabgrass. By spending a year letting the soil mellow while smothering the weed base, I was able to start the weed fight this year in a position of strength.

This year’s weed control efforts started right away, which is another piece that seems key. If I’d waited until the weeds  looked like garden plants, I’d have lost the edge and it would have become real work. The truism here is that if you’ve got a weed-free garden in July, it’s because you put the time in in April and May.

Weeding the 1,800 square feet in this garden probably took a couple hours a week in June, but I’m probably down to an hour a week now that the plants have taken off. I do 20 minutes a morning on my way to the chicken house. I don’t squat unless I absolutely have to, and do 95% of the weeding standing upright with this tool. 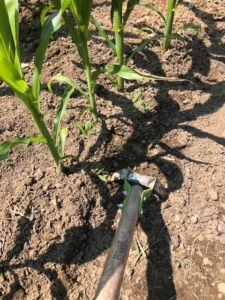 I’ve heard them called a bunch of names, including a loop hoe and a push-pull weeder. It’s basically just a two-sided blade that you can work while pushing or pulling. If you hit the crabgrass when it’s this big: 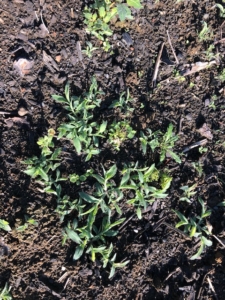 You can kill it with one hand. Those same plants, three weeks from now, would require hand digging.

As I planted, I made sure all the rows were wide enough to accommodate the tool – I use it as a cultivator, too, when the beds are just getting established. I don’t cultivate the paths that are in between the beds deeply – the paths are permanent and I don’t mind soil compaction here. When weeds grow in the paths, I run the loop hoe over lightly so they’re cut near surface level because I don’t want to dig in deeply and aerate the soil and stimulate microbial activity.

Any place in the garden that didn’t get planted this year but might someday got covered. In some beds that meant planting buckwheat or sunflowers, which grow fast and dense – they’re placeholders that bees and birds love. Other areas got covered with old newspapers and then any biomass I had lying around, like old leaves or planer shavings. The point was to eliminate bare dirt as much as possible.

The danger of these kinds of pieces is that the writer can come off as smug – it’s like the way Facebook makes everyone’s life seem more photogenic and perfect than it really is. So let me assure you, this garden has plenty of imperfections. I mulched a bed of peppers with newspaper and planer shavings in late May, and I think I set the plants back at least 2 weeks because the soil temperature couldn’t get warm enough under the mulch. I didn’t look closely at the straw I used last fall to mulch garlic, and the weed seeds in it – weeds I don’t recognize – have been a pain to deal with all summer. That was very much a self-inflicted wound. I could go on.

Still, I’m happy with how things look, and I hope there’s something helpful here for people who are new to all this. 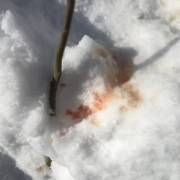 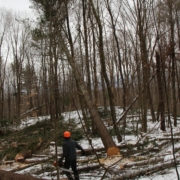 The Fragility of the System 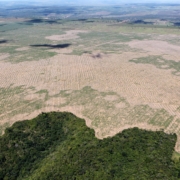 A Point to Make: We Do Forestry Pretty Well Here
Turning a Patch of Lawn into a Vegetable Garden, Part 4