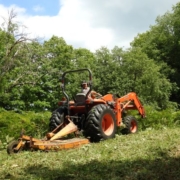 I’m proud to say that I’m a sixth generation Vermonter and a second generation brush hogger. My dad first introduced me to this activity when I was around eleven years old. For those not familiar with a brush hog, it is a two bladed mower mounted on the back of a farm tractor. If you can run it over with your tractor, this thing can mow it. Dad had purchased 32 acres of land in West Bolton with a variety of terrain. Woods, scrub fields, and beaver ponds. He bought a five-foot-wide Sidewinder brush hog to go behind his 1953 8N Ford tractor. The brush hog’s blades are driven by the tractor’s PTO shaft, and on an old 8N that does not have live hydraulics, the PTO shaft can continue to drive the tractor forward by the momentum of the spinning blades even after the clutch pedal is pushed down. My dad learned this quirk when he ended up buried to the axles in a beaver pond. Once he was extricated from the pond, he acquired an overrunning clutch device that mounts on the shaft and this solved the problem.

Soon he commenced to reclaim the grown over fields and woods roads with his much loved tractor and brush hog. For dad, it was almost like a sport to see what he could hog. But, as he pointed out, not a spectator sport. Stuff would be thrown out the back and sides of the brush hog at amazing speeds and directions. One occasion when he was hogging he hit something substantial and broke a blade. I’d heard the racket and went to check it out. As I wandered around in the area where it happened to try and find the busted off piece, he asked me what I was doing. “I’m looking for the broke blade. Maybe you can weld it back on.” I replied. “Thanks for the effort boy, but I believe you’re looking in the wrong county.”

When I began working in the woods, I bought a 60 horsepower four wheel drive tractor. I soon purchased a brush hog and started to take hogging jobs while I was resting. Savvy woodland owners knew the importance of retaining their forest openings — that supply critical edge habitat and open areas for songbirds, deer, and turkeys. I always tried not to mow until August 1st to allow birds to be done with raising their young and fawns to be up and moving more with mom. If possible, I tried to make just a couple passes around the field and let it set for a day. This sort of warns the critters of what is coming and gives them time to vacate the premises. Waiting until as late in the summer as possible also saves the milkweed for Monarch butterflies to use.

I learned some things about brush hogging the hard way, just like my dad did. Like that it pays to walk some areas if you suspect there might be hidden drainage ditches and mark them. Even in places that I’ve mowed year after year, I still walk with a roll of blue masking tape and fold a small piece of it back on itself on a stem of goldenrod or timothy to mark an old stump or rock. I’ve found it’s better to take the time to do that than to shear a pin or break a blade. For a job well done, slow down the speed of the tractor but not the RPMs of the tractor’s engine. Plus, if you get in trouble, and you’re going slow, things happen slowly. And for the love of Mike, sharpen the blades now and then. Nothing looks worse than a hogged field that looks like it has been fluffed instead of mowed.

I now live on those 32 acres dad bought. When he passed away I sold my brush hog. Now I use his old Sidewinder which is still in amazingly good shape despite being nigh onto fifty years old. I always grease the PTO shaft universals and check the gearbox for oil before each season of use, just like dad taught me. And I can’t help but smile every time I mow my way past that spot in the beaver pond. — Bill Torrey

https://vermontalmanac.org/wp-content/uploads/brushhog-lo.jpg 433 577 Dave Mance III https://vermontalmanac.org/wp-content/uploads/VTALMANAC_LOGO_STACK_TAG-300x150.png Dave Mance III2020-09-06 13:33:392020-09-08 18:28:21Brush Hogging for Dummies
Yellow jackets have noticed that we eat outdoors now more than we did in pre-Covid... Cecropia caterpillars grow to be four inches long and are well decorated and...
Scroll to top