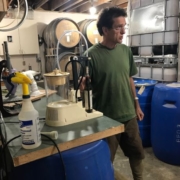 Apple Balsamic Vinegar of Vermont hit the shelves just last fall. Made by Side Hill Cider Mill in Vershire, it’s a highly unusual product. Neil Hochstedler, the owner, has found only two other producers – one in Ireland and a small company in Massachusetts. He said his idea “seemed like a natural and logical” extension of his existing cider vinegar business.

Neil’s been deep into apples since the 1970s, when he picked and pruned for a living. He brought his work home with him, grafting and pruning apples at his own place. Before long, he was producing more perishable apple juice than he could use, and he turned some into cider vinegar, which he has been selling for several years. Too much vinegar inspired him to diversify his offerings, so he created a balsamic line. With help from Sebastian and Sabra Ewing of neighboring Flag Hill Farm, they pretty much invented a commercial-scale production process and have gotten started on marketing.

Not unlike the more familiar balsamic vinegar made from red grapes, Neil’s process begins with boiling apple juice to a sweet syrup, which is done in a small sugaring evaporator.

To make cider vinegar, the sugars in apple juice are first fermented to alcohol and, in a second fermentation step, acetic acid-forming bacteria that have survived the fermentation process are augmented with selected acetobacters which convert the alcohol to vinegar.

To make apple balsamic, the cider vinegar is mixed with the sweet apple syrup until the acid level is right. The mix is then aged in wooden barrels, with some oak chips thrown in. At every step, things can go awry. As Neil says, “There have been a lot of setbacks.” But he finds the complicated relationships among the ingredients and conditions fascinating, and when the right apples, aeration, time, and temperature have been provided, the result makes it worth all the trials and errors.

Neil’s other job is as a machinist, which has come in handy: he’s converted a carpet steamer into a tool that shrinks the sleeves on the bottle caps and has modified aquarium pumps to aerate tanks of vinegar. The kind of electric mats made for starting seeds keep the tanks warm.

The label on the Apple Balsamic Vinegar of Vermont says that it’s “Organic * Gourmet * Handmade * Subtle * Complex,” and where it’s sold, mostly at farm stands and coops at this point, it’s being gobbled up. Somewhat unexpectedly, Neil even likes the sales part, especially when he meets anyone interested in vinegar. It seems to have become an obsession. Now there’s a storehouse of tanks, drums, and casks that should keep him obsessed for a long time.

Snowy owls have recently been seen in Vermont. We’ve all heard that they leave their arctic home when food there is scarce but another reason for these erratic irruptions might instead be that they occur following an unusually successful breeding season – successful because of an abundance of prey.
A perfect day for apple tree pruning. Not too cold, not too sunny, and just a little snow left.
Late in the evening tonight and through the early hours of the 14th, the Geminid meteor shower will put on a good performance if it’s clear. The new moon will not interfere and these quite reliable meteors come in yellow, green, and blue, as well as white.
When woodpeckers feed their fledglings there’s a big racket, including relentless shrieking.
Proving once again that a hard rain is the best way to get rid of snow. Our 8 inches or so of snow was reduced to zero to 2 inches overnight. Creeks are rising.
This weekend’s cool, May-like weather has been a blessing for those of us who are desperately trying to catch up on our wood.
Unlike many of us humans, rattlesnakes like it hot, especially the females. When pregnant, a female’s body temperature is 6 to 8 degrees C higher than normal, which enables the embryos to develop.
Virginia creeper and grapes are foodplants for Abbott’s sphinx moth caterpillars. Large green spots – much like the immature grapes nearby – cover the back of this striking insect. They will pupate soon, so check for them now.
Hummingbirds can distinguish many more colors than humans. Not just ultraviolet,... The green frog eggs laid at the warm edges of our pond hatched in about three...
Scroll to top