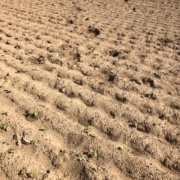 Meander through a freshly-turned meadow. 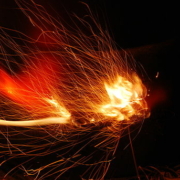 Credit Robert Frost for the proverb “Good fences make good neighbors.” This may actually be true. I would fine-tune it and add that good electric fences make good, cautious neighbors and can supply a fair amount of entertainment. This windfall of amusement was discovered with the electrification of the fences around our farm when I was a kid.

My Old Man always worked under the assumption that if you were going to do something, then by all means, do it up proper. If a fence is going to be electrified, make sure it has enough juice to give a cow a realistic preview of what barbecuing is all about. This strategy also cuts down on the time spent keeping grass and weeds from touching the fence and grounding it out. Get the current hot enough and any offending weeds will be cut off shortly after contact. There may be an occasional grass fire to battle, but this serves to supply yet another opportunity for entertainment and exercise.

The brand of electric fencer dad used was called “Weed Chopper.” It could just as aptly been named “Cow Stunner,” “Crotch Burner,” or “Kid Taser.” I once saw one of our heifers make the poor choice of swishing her tail at flies whilst standing too close to the mega-charged fence. Her tail snagged on the top wire. She dropped to her knees with a moan, jumped up with a bellow, then lit out like she was running in the Preakness, leaving a clump of tail hair smoking on the fence.

Then there was the time my Old Man and our good farmer friend and neighbor, Garth Perkins, needed to enter one of our pastures to check on the health of a cow. Dad stood 6’ 2” and when he came to the two-strand electric barbed-wire fence, he easily threw one leg over, then pivoted a little on it as he swung the other leg over to cross it. Garth was only 5’ 8”, and he tried to imitate dad’s maneuver. He came up shy of the necessary clearance. I’d never seen a man become so animated so quickly, nor viewed one who danced so well on his tip-toes while yodeling outside of the theater.

As owners of the fence, or “keepers of the flame” as Garth once referred to us after the coverall episode, it became my duty to warn friends and visitors of the stunning quality of our fence, should they be in the vicinity. If they were a dumb-ass cousin or a neighborhood nemesis, this warning could come a bit belatedly, if at all.

“Is that fence electric?” One of my many annoying turd cousins would ask.

“Yeah, but we only turn it on at night to save electricity. It ain’t on now. Go ahead and touch it.”

Being the low-wattage chumps most were, they’d take hold and get their battery boosted.

“Oops, sorry. Could’ve swore I shut it off this morning. My mistake.”

I always made sure I could out-run whoever got jolted or at least get a good head start while they were recovering their senses.

The most painful application of electricity to a singular body part that I ever witnessed occurred late one summer afternoon. Lute Bouchard, his younger brother Twitch, Dickey Hawley, and I were heading home from a jolly good time spent at the swinging tree in a ravine between our place and the Hawley’s. We all took turns going under the fence. As we gathered on the other side, Lute announced he had to “squeeze the weasel.”

I still have nightmares about the unpleasant incident that may have stunted my growth enough to cause me to be the second shortest pupil in class throughout grade school. A bunch of us were playing hide-and-seek over at the Hawley’s one summer evening. Unnoticed by us, Mr. Hawley had extended his one-strand electric fence about thirty feet into the hay field to give his crow-bait horses something to eat as his regular pasture looked like a putting green. When whoever was “it” commenced counting, three of us took off running to hide in the deep grass of the hay field. We were trucking flat-out in a skirmish line when we hit the fence. I was short enough that it caught me right in the throat. We ran into the fence so hard and fast that we stretched it out like you see in a Road-Runner cartoon and we couldn’t get away from it. By the time I got untangled you could’ve lit a cigarette off my nose. I was spitting sparks for a week.

The days of the serious electric fencer are long gone. Used to be you could drive along the road past a farm with the car radio on and hear the pulsing static of a fire-spitting fence buzzing along to the beat of the music, a sizzling reminder that the farmer there had himself a proper fence that was respected by man and beast. Now they have solar powered fencers that barely make a chicken cackle. With the reliable old Weed Chopper you could fry an egg. And the chicken that laid it. 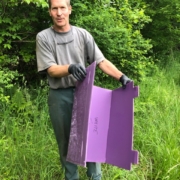 Henry Martinka, from Shaftsbury, prepares to hang an ermerald ash borer (EAB) trap in his back meadow. The trap is designed to provide data that will help monitor the bugs’ spread.

Emerald ash borer (Agrilus planipennis) is an invasive insect from Asia that was first detected in Vermont in 2018. It’s currently been detected in 9 counties, although high-risk areas include all 12 counties in the state. The most recent towns confirmed infested and/or high-risk areas include Brattleboro, Vernon, Guilford, Dummerston, Putney, Hartland, Hartford, West Windsor, Windsor, Weathersfield, and Norwich.

Adult emerald ash borers are green metallic in color with purple/red metallic abdominal segments beneath their wing covers. The traps are baited with a pheromone-based scent. Research has shown that they’re attracted to purple, perhaps because it mimics the abdominal color. 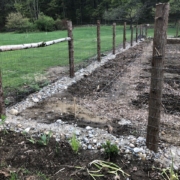 It’s time to figure out a fence for the garden, and the options seem endless and imperfect. I’m going to want to keep cottontails, woodchucks, deer, and birds out, and so the logical solution is a 2,000-foot cage. Of course I also want an aesthetically pleasing place to be, so right away the practically-perfect is the enemy of the good.

In past gardens I’ve used single-strand electric fence, three courses high. And it worked well for deer. I’d smear peanut butter on the wire to train them. Each fall the fence came down, and each spring a tractor could till, unimpeded. The downside was that it wasn’t effective for cottontails or woodchucks, who could go right under. And it was a pain to weed-whack, which is important because the grass growing up into it shorts the electricity. And I want to try to not use a tractor anymore, so the fact that I can remove it easily is no longer as big a plus as it was.

So I decided to go the classic welded 2 x 4 wire route. The pros are that this fence thwarts woodchucks and bunnies. The structure can also be nice, either as a means of growing vertically or as a way to help suspend bird netting over vulnerable crops. The downside, besides the fact that it’s labor intensive to build and maintain, is that it still leaves you with a deer problem. They can jump 8 feet, and so to really keep them out you’d have to run two courses of 4 foot wire and turn the whole plot into a prison cell.

I’m hoping to get around this by running one 4-foot course of wire, then messing with the deers’ depth perception, an idea codified by UVM’s Leonard Perry in this online article. If I put 45 degree kickers on the corners which will go out and up, away from the fence, I’m hoping that maybe a single strand of wire will leave them hesitant to jump.

Once the decision on fence style was made, it was time to source posts. Cedar makes good posts. Locust makes good posts. Unfortunately, I have neither of these species growing on the back 40. So I went online and found Ed Fox, a farmer in Pittsford, who was selling freshly cut white cedar posts for $5.50 each. This seemed like a good deal to me. Plus I got to use Vermont wood and put the cash money right in his pocket instead of in a register at a big box store. After loading them on a trailer, he watched with amusement as I tried to tie them down. “If you get pulled over, just say you’re a farmer and you’ve got enough problems,” he said.

Once home I dug 28 roughly 2-foot-deep holes that were between 6 and 10 feet apart. I backfilled each hole with gravel that I dug out of a sandpit on the property that was originally used by the state to improve Route 7A when it was paved in 1931.  I ran a course of wire down the long side of the rectangle, then I put a 12-16” strip of landscape fabric in between each post and under the wire, which was then covered with gravel. I don’t want to have to fight weeds. 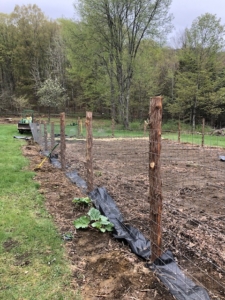 I bought the welded wire from Poulin’s feed store, which used to be Whitman’s feed store. Art and Kathy Whitman were pillars of the Ag community for many years in Bennington County and were supporters of Volume I of the Almanac. I point out these details because rural economic life is an ecosystem, and if we don’t support each other, we all suffer.

I reinforced the corner, then stapled the wire onto the first fence post. At the other end, I cut a disposable 4-foot limb, stapled that to the other end of the course of wire, attached the limb to the tractor bucket with a chain, then used the tractor to apply tension to the wire. It worked fine for a home garden. No need for the fancy fence pullers that the professionals use. 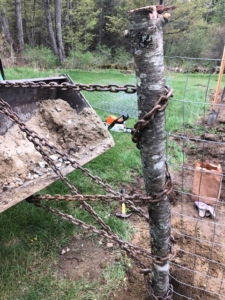